After more than a decade of consistent losses from rolling a long NG position, the cumulative return has been positive for the past 12 months.  This has only occurred briefly during the 'polar vortex' of early 2014 and during the 2008 commodities 'super cycle' peak. 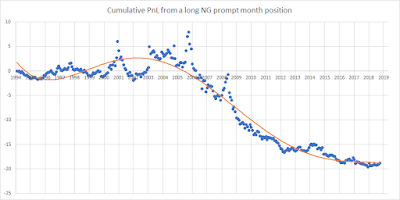 For years, long only positions in NG have experienced losses on average in the last month before rolling the position.  The traditional explanation for this has been an oversupplied market relative to storage capacity.  Producers sell into the short term market; storage owners earn a 'negative convenience yield' for storing this into the future.

Fracking costs have increased, partly driven by input costs Fracking PPI and increasing interest rates. Industrial demand has recovered according to the EIA.

It seems likely that the natural gas market is in transition towards an equilibrium in which there is no longer an excess of supply being stored into the future relative to demand.

Could this winter be the first test of this phenomenon?  Will we see significant backwardation in the curve as convenience yield accrues to holders of the physical commodity?
Posted by Lloyd at 1:51 PM